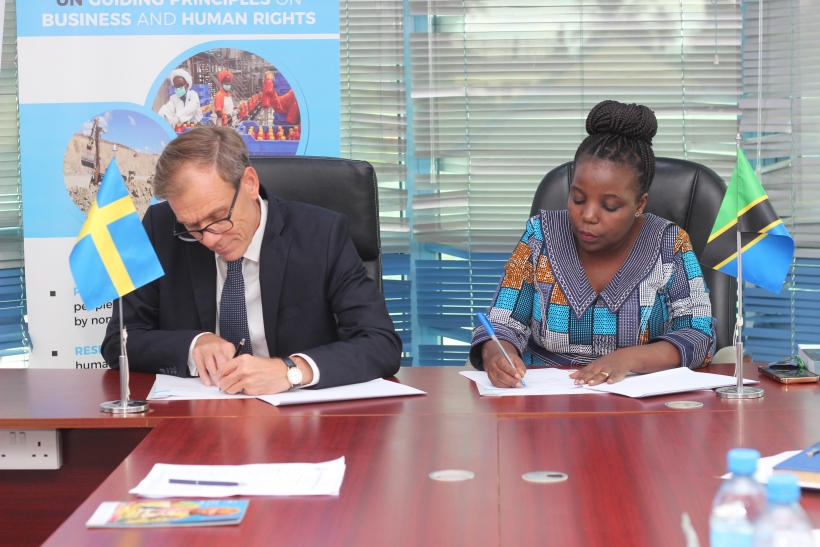 Posted 4 weeks ago by admin

On the 19th of April 2022 Legal and Human Rights Centre (LHRC) signed a partnership agreement with the Embassy of Sweden in support of LHRC’s Strategic Plan 2019-2024 and complementary Operational Plan 2022-2024.

The partnership agreement which includes a financial contribution of thirty-six million Swedish Kronor (SEK 36,000,000) was signed by H.E. Ambassador Anders Sjoberg and Advocate Anna Henga, Executive Director to LHRC. This contribution will be used to support the core programmes and activities of LHRC.

During the signing ceremony, Advocate Anna Henga thanked the Government of Sweden for their financial and technical support since 2001 and reaffirmed LHRC’s commitment to deliver on its envisioned results while realizing a just and equitable society in the United Republic of Tanzania.

In his remarks, H.E. Ambassador Anders Sjoberg stated “Sweden is a firm believer and supporter of the Universal Human Rights, wherever we are in the world. The right to think, express, participate and love is universal. As a believer in Human Rights, we consequently must be a supporter of any defender of Human Rights. This is why we just signed three more years of core support to LHRC; one of the most relevant and leading organizations and watchdog of the human rights in Tanzania”.  He concluded by adding “...LHRC is assessed to have robust quality assurance systems as well as a highly relevant strategic plan, targeting both the duty bearers and the right holders”.

LHRC and The Embassy of Sweden reaffirmed their commitment to supporting the government of the United Republic of Tanzania to promote democracy and respect for human rights to achieve a just and equitable society and also contributes fervently to social and economic human development.