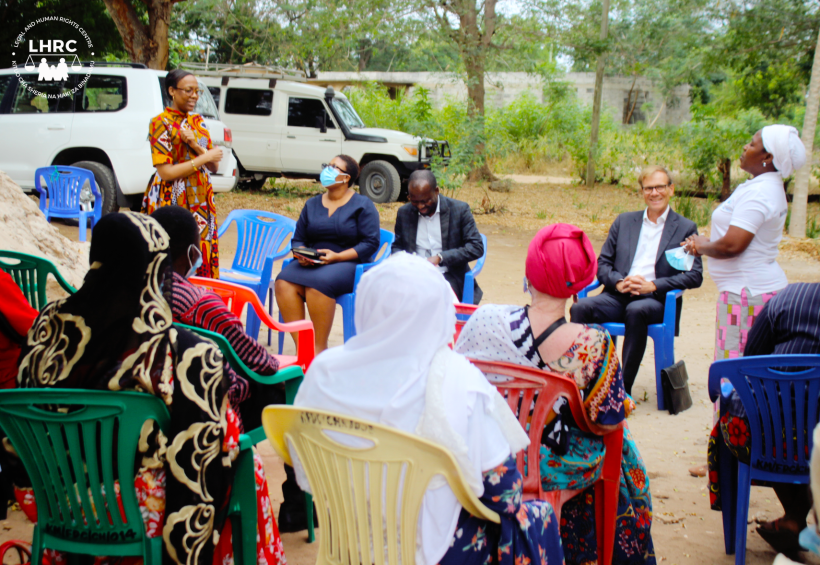 On the 29th of July 2022, Legal and Human Rights Centre and the Embassy of Sweden in Tanzania jointly facilitated and went on a monitoring field visit to Kilwa District located in Lindi Region, Southern Tanzania. Sweden, being a firm believer and supporter of universal human rights is one of LHRC’s top core funders to her Strategic Plan (2019 – 2024) and complimentary Operational Plans (2019 – 2021 and 2022 – 2024). The second phase of LHRC’s strategic plan and operational plan (2022-2024) has a strategic demographic focus on Southern Zone and Southern Highlands. This decision was driven by reports of increased incidences of Gender Based Violence (GBV), documented in LHRC’s annual Human Rights Report.

One of the leading human rights violations in Kilwa is violence against women. Psychological violence against women is very common in Kilwa. Polygamous marriages have led to many matrimonial issues including divorce and desertion. Most men fail to provide for multiple families once they marry more than 2 wives and therefore desert their families. This has been a major source of psychological torture for deserted wives and children, and in most cases, women are left pregnant, and they have to fend for themselves and their children. Rape and physical violence against women are also issues of grave concern in Kilwa and the entire Lindi region.

LHRC’s Human Rights Monitors programme of support is a network of volunteers who are members from the grassroot communities that are passionate about advocating against human rights violations and creating awareness of human rights best practices in their communities.  LHRC’s human rights monitors help to report issues regarding human rights violations, data received is collected and documented on LHRC’s annual flagship publication, i.e., Human Rights report. In addition to data collection and documentation, LHRC responds to the violations reported in different ways including undertaking a fact-finding study for informed decision-making or working in collaboration with government agencies/ institutions to stop such acts.

In Kilwa LHRC works with 2 human rights monitors, one located in North Kilwa and the other one in the Southern part of the district. Ms. Pili Kuliwa, is one of LHRC’s human rights monitors located in Kilwa. Pili first became human rights monitor in 2003, through capacity building and empowerment on human rights best practices received through LHRC’s grassroots interventions, Pili was empowered to do more for her community, her passion for increasing access to justice and promotion of human rights in her community grew and this motivated her to establish a women’s forum called ‘Tumaini la Wanawake Wa Kilwa’ translated into English as ‘Hope for Women in Kilwa’. The forum was launched in 2016 with 50 members and has expanded since to include a total membership of 525 members, including a youth wing. Pili has effectively used knowledge gained and self-help kits such as publications on best practices on human rights produced by LHRC to empower over 500 women in Kilwa. The forum has a representation in 13 wards in Kilwa out of 25; the plan is to expand to the other wards and the entire Lindi Region and neighboring villages and regions.

During the event, Maria (not her real name) who is a member of the Tumaini la wanawake wa Kilwa forum, informed how she adopted a young girl who had been raped and brutally beaten and abandoned by her family. Through the women’s forum, Maria was able to work with the gender desk at the Kilwa police station and the social welfare officer and assist the girl to get medical help and currently the girl is progressing well and continuing with her studies.
Pili highlighted that it was because of the knowledge gained from LHRC’s capacity building programmes of support, the forum was able to create awareness and advocate for human rights best practice as one voice in their communities. This resulted into the establishment of a gender desk at the Kilwa Police station in 2018. Youth in Kilwa have also been motivated and joined the forum to create awareness and advocacy amongst the youth.

Another area of concern in Kilwa is conflict driven by land cases due to unfair compensation from the municipal council after a resident’s land was confiscated for public use. For instance, a large portion of land (most of which has been confiscated) has been set aside by the government for the aim of expanding the Lindi Airport and passage for a gas pipeline.  Most females own land in Lindi therefore the issue of land negatively affects them and their children.
In 2021, LHRC extended its legal aid programme into the grassroots by facilitating a mobile legal aid clinic in Lindi and Mtwara. A total of 234 clients showed up and they were provided with legal aid, this initiative aims to further enhance access to justice to the underserved. One of the beneficiaries from the legal aid clinic Ms. Zuhura (not her real name) and a member of Tumaini la wanawake forum informed how through the legal aid provided by LHRC, she was able to follow through on her land case issue which was confiscated by the government for more than 10 years. Zuhura and other members of her community had been following up with authorities for compensation with no success. Being empowered through the knowledge acquired by LHRC legal officers, the community was able to follow up with authorities in an informed manner and two weeks ago they were notified by the authorities that the land which had been confiscated is being evaluated for compensation, this is a big win!

Members of the Human Rights Club from Kivinje Secondary School were also in attendance. LHRC has established a total of 5 human rights clubs in Kilwa District. These clubs were strategically established for the main purpose of imparting the culture of human rights to children to raise a society in which youth are aware, knowledgeable, confident, and motivated on human rights issues. The human rights clubs are critical in the Southern Region because of the norms, traditions and cultures that hinder equality and violate human rights, LHRC hopes that in the long run the vicious cycle of early marriages, pregnancies and school dropouts will end.

Fred (not his real name), the chairperson of the Human Rights Club in Kivinje Secondary School informed of how the human rights club has helped to not only create awareness amongst youth on human rights best practices but also in building a culture of accountability and empowerment. He gave an example of how before the establishment of the club, school dropouts rates were high due to early marriages, misbehavior/misconduct and teenage pregnancies. However, this has reduced tremendously. He also shared how the club has also helped to build confidence and empowered girls to pursue education because they are now aware that they have equal rights as do boys. In 2022, Kivinje Secondary School was proud to share that there are 90 girls and 67 boys enrolled to take their form four national examinations, a tremendous leap and win for the club.

In his speech, H.E. Anders Sjoberg informed how he was pleased to hear firsthand from the beneficiaries of how they have benefited from LHRC’s grassroot initiatives. “Sweden has been supporting LHRC for many years and we are proud partners of LHRC” said Ambassador Sjoberg, he continues “Sweden is a strong advocate for inclusiveness and equality. I am pleased to witness and learn from women who are taking bold steps towards advocating towards achieving equality and human rights in their communities. Globally, achieving inclusiveness in societies is still a big challenge, however collectively we have to continue to pursue the realization because inclusiveness brings about sustainable human development.” H.E. Ambassador Sjoberg concluded by saying “in Sweden, we believe in the 4 ‘Rs’ to attaining sustainable human development; equal Representation; equal Rights before the law, equal access to Resources and lastly Role Models. I congratulate you Pili for being a role model in your community. Tanzania has made some great strides in achieving equality in top leadership demonstrated by H.E. President Samia Suluhu Hassan, currently there are women holding key ministerial positions, the Speaker of Parliament is a woman and the ratio in the parliament is 40% women to 60% men a tremendous progress towards achieving 50/50”.  Pili has demonstrated that she is indeed a Role Model and a Champion for Human Rights. LHRC wishes to see through continued engagement and empowerment, ‘Pilis’ in every District in Tanzania. LHRC is committed to realizing a just and equitable society. Through its development programmes of support in partnership and collaboration with key governance stakeholders, LHRC believes that achievement of the same is feasible.