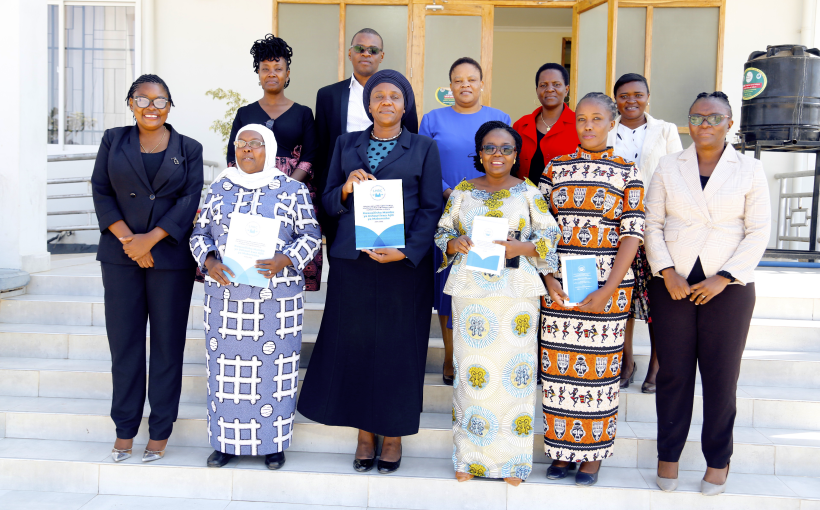 LHRC paid a visit to the Ministry of Community Development Gender, Women and Special Groups in Dodoma

Posted 2 months ago by admin

The Executive Director of the Legal and Human Rights Centre (LHRC) Advocate Anna Henga paid a visit to the Ministry of Community Development Gender, Women and Special Groups in Dodoma and presented LHRC's recommendations for improvement on various policies and systems in the ministry. The Executive Director was accompanied by LHRC's Dodoma Coordinator, Advocate Hidaya Haonga and the Senior Program Officer for Gender, Women, Children and Persons with Disability Adv. Getrude Dyabene.

During the meeting, Minister Hon. Dorothy Gwajima said they had agreed with the LHRC to work together to revitalize their partnership agreement on areas of shortcomings and how to work on them. Among the key issues that emerged during the discussions was the Ministry's partnership with LHRC and the importance of prioritizing the review of the MoU to ensure its relevancy to today's issues. Other issues discussed were the ongoing violence against women and children and how the ministry, LHRC and other key stakeholders can play an instrumental role in ensuring sustainable solutions to the problem are undertaken.

The Ministry and LHRC also discussed on the role and importance of data for women in bringing sustainable change and ensuring strategic plans are designed and implemented to address issues hindering women to fully meet their unmet potentials.

Issues concerning children were also not left out during the discussion table, these issues are critical for the development of the Country. Keys issues discussed were children in conflict with the law, child labor, children living and working in streets and also the alarming increase of violence against children especially sexual violence.

LHRC had an opportunity of sharing the Tanzania Human Rights Reports 2021 data on violence against women and children and the minister emphasized on the need to draw collective efforts to tackle the issues.

LHRC and the Ministry share a good working relationship and have partnered in the analysis of the Law of the Child, the Adoption Regulations, and the analysis of the Foster Care Regulations. These will see effective realization of Children Rights in Tanzania. The Ministry and LHRC are also finalizing the National Guideline to Marriage Conciliation which will be launched in October this year. The regulations will address the issues concerning marriage disputes and the composition of marriage council together with the having a consistency procedures and dispute resolutions which at the end will benefit communities especially women who have been affected most with the issue.

Furthermore, LHRC Executive Director, Advocate Anna Henga added that the LHRC will continue its relationship with the Ministry in advocating for the rights of special groups especially discouraging gender-based violence against women and children as well as educating the public on Femicide cases that have been rampant, all of which will be done in collaboration with the Ministry of Community Development, Gender, Women and Special Groups.